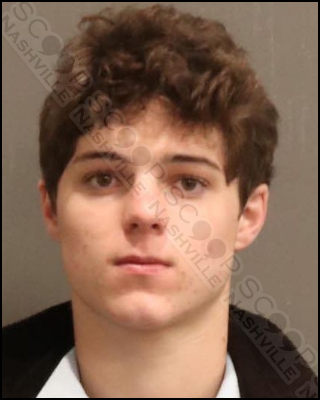 19-year-old Riley Dismukes of Florida was taken into custody in the early hours of Saturday morning along with his co-defendant, Ellis Frimet. Both teens, from Florida, were observed attacking another individual on Broadway in downtown Nashville. When asked to disperse and stop fighting, Dismukes refused all commands from officers and continued in the disorderly conduct.

Riley Louis Edward Dismukes of Cove Lane in Panama City, FL, was booked into the Metro Nashville Jail on December 31st, charged with disorderly conduct. A judicial commissioner set his bond at $100, and the Davidson County Sheriff’s Office gave him pre-trial release from their facility.