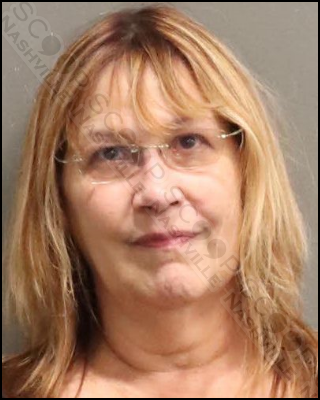 Police say 67-year-old Beverly Cosgrove was involved in a single-vehicle crash at the intersection of Matilda St. & Marydale Dr., where she ended up stuck in a steep ditch. Ethan Myers came to assist Cosgrove out of her vehicle. She told him she had been out drinking with friends and was the “most drunk I’ve ever been in my life!” She later stated she had two glasses of wine at a Hendersonville restaurant. Cosgrove performed poorly on field sobriety tests and later blew a 0.132% BAC on a breathalyzer.

Beverly J. Cosgrove of Matilda St in Nashville, TN, was booked into the Metro Nashville Jail on January 3rd, charged with driving under the influence. A judicial commissioner set her bond at $2,000, and the Davidson County Sheriff’s Office gave her pre-trial release from their facility.