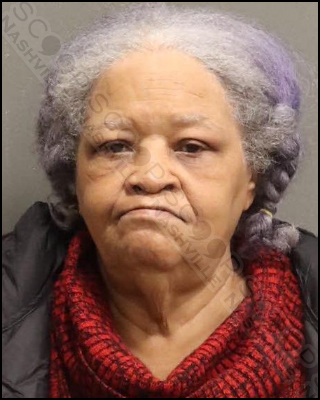 Linda Cooper says she walked into the lobby of the John L. Glenn Senior Residential Center on Ed Temple Blvd on New Year’s Eve, where she observed 73-year-old Katherine Waters sitting in a chair. She says Katherine looked at her and stated she wanted to kill her and accused her of stealing items from her room. Linda called police, and a warrant was issued, charging Waters with disorderly conduct. The 73-year-old is free on pre-trial release.

Katherine Renea Waters of the John Glenn Retirement Center on Ed Temple Blvd in Nashville, TN, was booked into the Metro Nashville Jail on January 1st, charged with disorderly conduct. A judicial commissioner set her bond at $100, and the Davidson County Sheriff’s Office gave her pre-trial release from their facility.