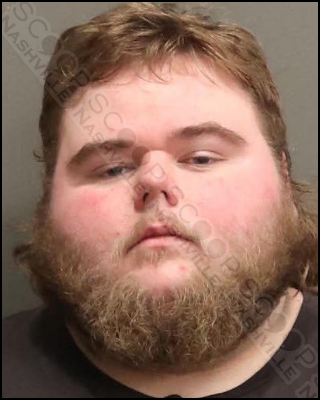 After 23-year-old Micheal “Chili Dawg Castleberry amazed a crowd at Tootsie’s Wednesday night and after his set when to a parking garage to retrieve his vehicle. As he pulled alongside Tootsie’s to load his equipment, he fell asleep behind the wheel while parked and running. Metro Nashville Police officers working the Entertainment District Initiative pulled behind him and woke him up with medical alongside. He claimed to have stopped drinking “two hours” prior to driving and claimed he was just sleeping while waiting on a friend. He performed poorly on field sobriety tests and was transported to booking, charged with driving under the influence. WhiskeyRiff covered his hands-free beer-chugging performance, accompanied by a Tiktok video with over 3 million views.

Michale Castleberry of 24th Ave in Nashville, TN, was booked into the Metro Nashville Jail on January 12th, charged with driving under the influence. A judicial commissioner set his bond at $1,500.