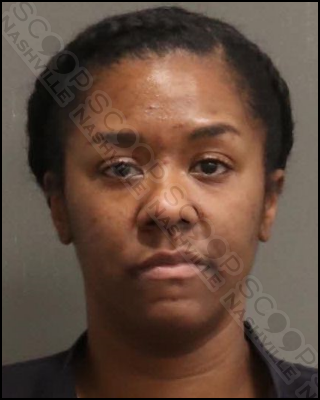 34-year-old Nelanie Tardy came to the residence of her child’s father on June 15th at 8 p.m. to take the child to a softball game. The father, Stephen Scarborough, told Nelanie via phone that the child wouldn’t be going due to the heat advisory that was in effect for the city. Nelanie reportedly became upset and pounded on the residence’s front door, and she was given notice to leave the property, or the police would be called. She left, but not before she scratched his vehicle with the keys that were in her hand, causing approximately $300 in damage. A warrant for her arrest was issued, charging her with vandalism. She was booked on that outstanding warrant on Thursday afternoon.

Nelanie R Tardy, of Whitaker Drive in Nashville, was booked into the Metro Nashville Jail on July 14th, charged with vandalism. She is free on a $100 cash bond.