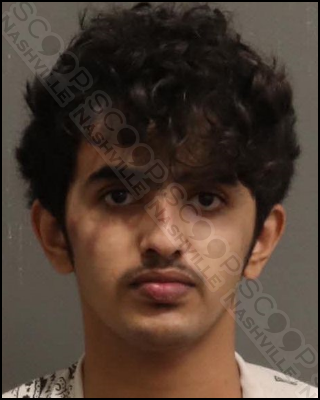 Metro Nashville Police Officers working the Entertainment District Initiative in downtown Nashville observed 21-year-old Sultan Nassir Al Shareef extremely intoxicated and disorderly in front of Jason Aldean’s Bar in the early hours of Sunday morning. Al Shareef was fighting with security and had his legs wrapped around the security ropes. He pushed and shoved and refused to be cuffed by officers who were attempting to detain him. Eventually, he was placed in the back of a patrol vehicle but was too intoxicated to provide any information about himself. A friend who was nearby provided Shareef’s name and phone number. As he was being brought inside to booking, Al Shareef attempted to run out and jumped over multiple DCSO guards to get out of the Sally port. He was eventually overpowered and processed.

Sultan Nassir Al Shareef was booked into the Metro Nashville Jail on July 24th, charged with public intoxication, resisting arrest, and escape. He is free on a $3,100 cash bond.

NOTE: 21 years old may not be an accurate age, as MNPD was unable to determine his DOB and used ’01/01/01′ as a placeholder in the system.