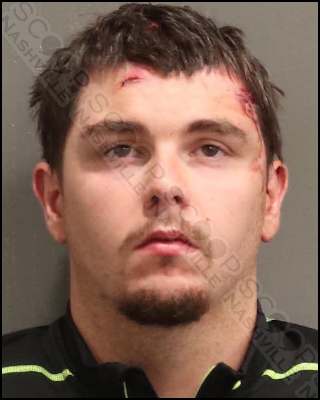 26-year-old Robert “Craig” Toney was jailed this weekend on multiple charges of domestic assault and vandalism after a night at the Opryland Hotel left the rural Georgia family in a bloody brawl. Craig initially was in a verbal argument with his girlfriend, Kelsea Lafferty Toney, and he grabbed her by the throat, strangling her, knocking her to the bed, and then to the floor, assaulting her the entire time. Craig’s stepfather, Ray Adkins, attempted to intervene, and Craig punched him in the mouth, causing visible injuries. Damages to the hotel room, the exterior hallway, the blood-soaked carpets, walls, beds, hallway, and wallpaper, are estimated to be up to $20,000.

Robert Craig Toney of Rose Ave in East Dublin, GA, was booked into the Metro Nashville Jail on September 4th, charged with 2 counts of domestic assault with bodily injury and felony vandalism over $10,000. A judicial commissioner set his bond at $20,000.