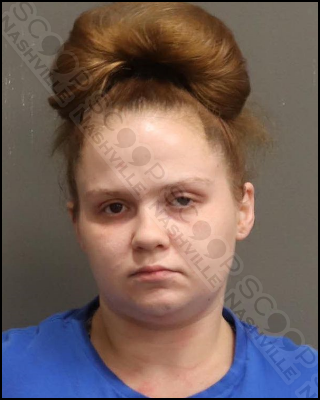 Police say 28-year-old Kaedee Miller Hembree struck one vehicle on Interstate 40 on Wednesday before coming to a stop in a lane of traffic just before 7 p.m. Responding TDOT crews report she was awake and alert and then suddenly lost consciousness while they were present. Nashville Fire responded and administered Narcan and eventually revived Miller, who admitted to taking her prescribed Seroquel along with an unprescribed Percocet shortly before driving. She was with DUI 2nd (she was convicted of a DUI in March in Murfreesboro) and driving on a revoked license.

Kaedee Guylean Miller Hembree was booked into the Metro Nashville Jail on September 7th, charged with driving under the influence (DUI), driving on a revoked license, and an implied consent violation. A judicial commissioner set her bond at $3,000.