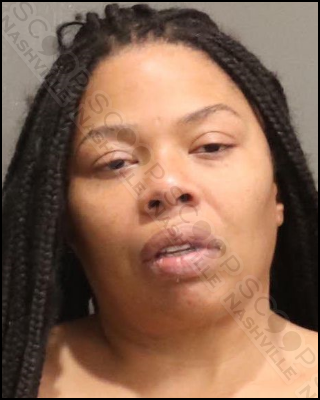 37-year-old Miranda A. Coombs was jailed Thursday on an outstanding felony warrant in Nashville, charging her with aggravated assault with a deadly weapon. She was dining at Eddie V’s Prime Seafood in downtown Nashville in March with an “acquaintance” when an argument erupted between the two, and a fist fight broke out at the restaurant. Ross Kovacs, a managing partner of the restaurant, attempted to intervene and was struck in the head with a candlestick holder by Coombs. He sustained a bleeding laceration to the head, and a warrant was taken out for Coombs.

Miranda A. Coombs of Tuckers School House RD in Madisonville, KY, was booked into the Metro Nashville Jail on September 8th, charged with aggravated assault with a deadly weapon. A judicial commissioner set her bond at $5,000.