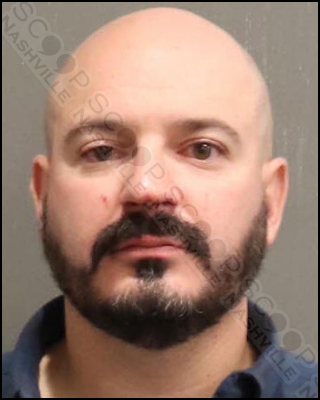 Metro Nashville Police say 39-year-old David Dybala crashed his vehicle into another near 1100 Broadway Wednesday and fled the scene. Officer located him as he was driving away toward the interstate onramp. Officers approached the vehicle, which stopped, and Dybala existed without any prompting. He reportedly reeked of alcohol and had trouble standing. He refused field sobriety tests but was unable to follow simple instructions, such as sitting on a concrete slab.

David J. Dybala of Saundersville Rd in Old Hickory, TN, was booked into the Metro Nashville Jail on October 19th, charged with leaving the scene of an accident, driving under the influence, and an implied consent violation. A judicial commissioner set his bond at $2,000.