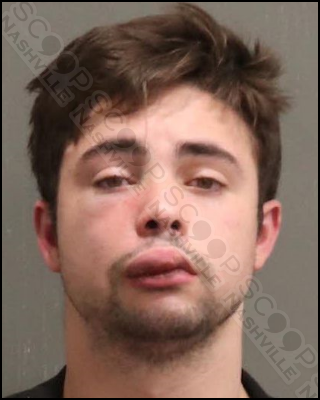 20-year-old Isaac Jameson faces multiple charges after Metro Nashville Police say admitted to being “on drugs” in addition to underage drinking while in downtown Nashville. Jameson was initially observed stumbling on Broadway when a bouncer from a nearby club advised Jameson was pushing other citizens and accusing one of taking his money.

Jameson attempted to enter multiple downtown bars and was successfully blocked by security until he reached Second Fiddle Saloon, where he was able to push past security and enter the bar area, which is where police caught up with him as he was in a physical fight with bouncers. Body camera footage shows him yelling “fuck you!” to police as he attempts to pull away from them. He was transported to Metro General for medical clearance, where he continued to resist personnel, and then transported to booking.

Isaac Jameson of Turner Lane in Brentwood, TN, was booked into the Metro Nashville Jail on November 10th, charged with disorderly conduct, public intoxication, and underage drinking. He is free on a $3,600 bond.