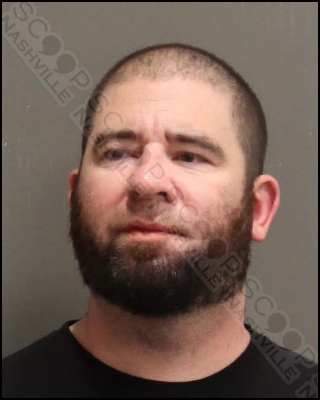 35-year-old Mathew Cookston reportedly was on an incoming flight to Nashville when multiple passengers reported he offered a minor female tobacco and then placed his hand on her inner thigh and moved it toward her groin. The victim immediately pushed his hand away and notified her mother and flight attendants, who moved the man to another seat. When the flight arrived at the gate, Airport Police made contact with the man, who was visibly intoxicated. He stated he had been in California at a drug & alcohol rehabilitation center but left early and flew home to Tennessee. When the crew refused to serve him alcohol on the plane, he drank hand sanitizer for the remainder of the flight. He was charged with public intoxication and released after an eight-hour hold with all charges dismissed.

Matthew Cookston was booked into the Metro Nashville Jail on December 3rd, charged with public intoxication. A judicial commissioner set his bond at $1,000. After an eight-hour public intoxication hold, he was released with the charge dismissed.