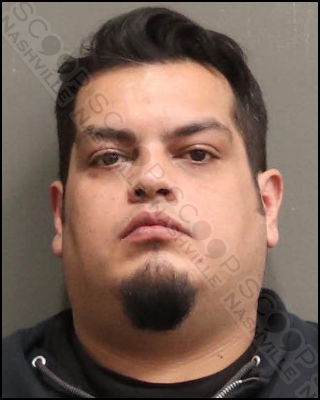 37-year-old Joshua Caine Soto is charged with DUI (per se) after allowing someone who was intoxicated to drive his vehicle late Tuesday night. Officers were dispatched to a crash on I-40W near exit 206, where Soto was a passenger in the vehicle which was registered to him. After the driver was taken into custody for DUI, Soto was also charged with DUI Per Se for knowingly allowing an intoxicated person to drive his vehicle.

Joshua Caine Soto of Athens Way in Nashville, TN, was booked into the Metro Nashville Jail on December 21st, charged with driving under the influence. A judicial commissioner set his bond at $2,000, and the Davidson County Sheriff’s Office gave him pre-trial release from their facility.