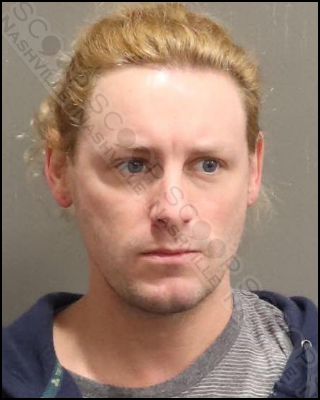 37-year-old Andrew Stone was reportedly arguing with his ex-girlfriend/roommate, Karen Van Winkle, late on December 26th over Christmas gifts. Karen told police Andrew was upset, claiming she didn’t do anything for him. As she walked away to avoid the confrontation, she says he followed her around the house and blocked doorways while yelling at her. She says she was very intimidated and in fear for her safety, due to a prior incident in California when he struck her in the face. He then drove off in her van, which he had never driven and had no permission to take. It was recovered a few blocks away, and Stone had fled the scene.

Andrew K. Stone of Coffee Street in Nashville, TN, was booked into the Metro Nashville Jail on December 30th, charged with domestic assault and felony theft. He is free on an $11,000 bond.