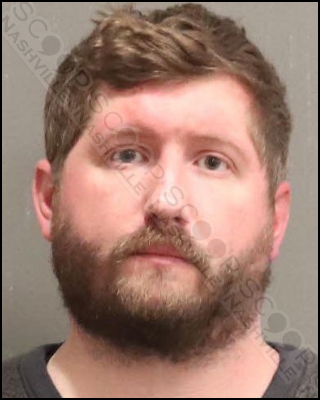 33-year-old North Carolina tourist Adam Perkins caught the attention of Metro Nashville Police after he was observed walking in traffic at 5th & Broadway late Saturday night. As officers approached to check on his welfare, it was immediately apparent he was extremely intoxicated. Officers attempted to guide him out of the road and back to the sideway, but Perkins refused. He began to yell and scream at officers and punched Sgt. EricPetlewski in the chest twice, while screaming “take me to jail!” As officers were taking Perkins into custody, he pulled away from officers and kicked at the windows inside the patrol car until he was placed into hobble restraints for transport.

Adam Harrison Perkins was booked into the Metro Nashville Jail on January 1st, charged with assault of an officer, resisting arrest, disorderly conduct, and public intoxication. A judicial commissioner set his bond at $3,100, and the Davidson County Sheriff’s Office gave him pre-trial release from their facility.