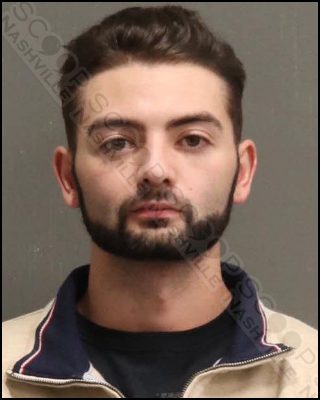 23-year-old Anthony Joseph Rizzo was pulled over by Belle Meade Police Officer Hayley Doty for displaying expired tags/registration at 3:14 a.m. on January 1st. He reportedly appeared intoxicated and stated he consumed alcohol earlier in the day and was currently coming from downtown Nashville. Rizzo performed poorly on field sobriety tests, and was transported to Metro General for a blood draw and then to booking where he was charged with DUI.

Anthony Joseph Rizzo of Stones River Cove in Nashville, TN, was booked into the Metro Nashville Jail on January 1st, charged with driving under the influence (DUI). A judicial commissioner set his bond at $2,000.