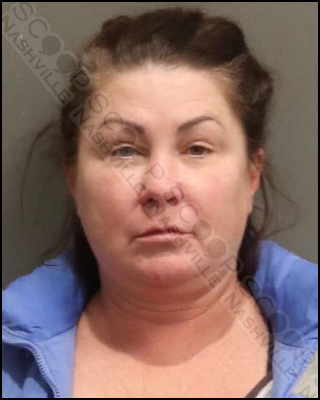 51-year-old Amanda Covington was driving her black Nissan Altima on I-40 on January 6 with a tag that expired in December of 2021, according to THP Trooper Keith Velez. As he spoke to Covington, he reportedly smelled alcohol coming from her and the vehicle. She stated she had “two small airplane bottles” of alcohol a few hours before driving. She performed poorly on subsequent field sobriety tests and eventually admitted she had been drinking “most of the day, yesterday.” She was transported to St. Thomas Midtown for a blood draw and then to jail, where she was charged with DUI.

Amanda K. Covington of N. Highlands Drive in Nashville, TN, was booked into the Metro Nashville Jail on January 6, charged with driving under the influence (DUI). A judicial commissioner set her bond at $2,000, and the Davidson County Sheriff’s Office gave her pre-trial release from their facility.