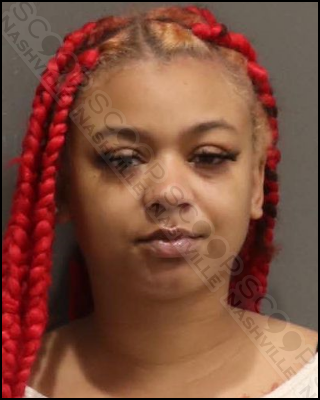 28-year-old Tyia Chante Bonner is charged with felony drug possession after crashing her vehicle on Maplewood Trace, and officers reporting that marijuana smoke was still rolling out of the vehicle when they arrived at the scene. A “large bag” of marijuana was in plain view, and a search revealed more “large bags” of marijuana, totaling 13.6 ounces. An additional 5 ounces of “synthetic marijuana” was located, along with 100 plastic bags, three scales, and $413 in cash.

Tyia Chante Bonner of Marswen Dr in Nashville, TN, was booked into the Metro Nashville Jail on January 10th, charged with felony possession of a schedule VI drug with intent to sell. A judicial commissioner set her bond at $10,000, and the Davidson County Sheriff’s Office gave her pre-trial release from their facility.