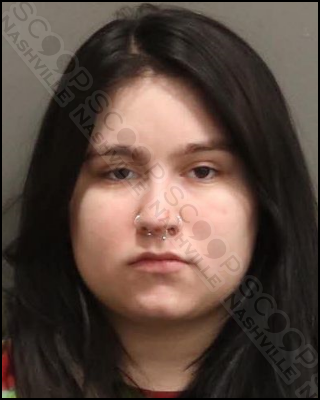 Police say 19-year-old Alexis Skerrett broke into the bedroom of her former lover, Autumn Jones, with who she also lives. Jones stated she had set up a security camera in her bedroom a few days prior, to make sure Alexis didn’t take any of her property while she was gone for a few days. While she was away, she received an alert on her phone that someone had entered the bedroom, and the video shows Alexis standing in the hallway through the now open door, along with two other people. The video then goes black. Skerrett was charged with criminal trespass and jailed on the charge.

Alexis J. Skerrett of Tyler Dr in Hermitage, TN, was booked into the Metro Nashville Jail on January 10th, charged with criminal trespass. A judicial commissioner set her bond at $500.