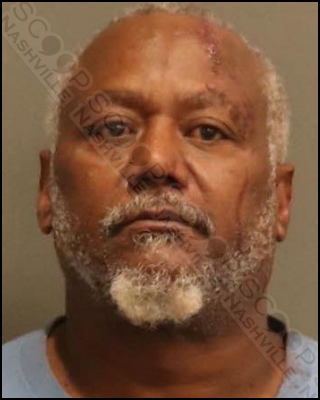 48-year-old Stacy Page says she suspected her husband, 53-year-old Richard Page, of cheating on her with a man. When she confronted him about the alleged affair at the Candlewood Suites in Goodlettsville, she says he slapped her in the face. She retaliated by smashing him across the head with a glass liquor bottle, leaving him with a significant gash. Police responded to the location, and the primary aggressor could not be determined, so both were taken into custody and charged with domestic assault. The question of his rainbow rendezvous was not answered, and the couple bonded out to their Heidelburg, Mississippi, address.

Richard Page was booked into the Metro Nashville Jail on January 21st, charged with domestic assault. A judicial commissioner set his bond at $1,000.

Stacy Page was booked into the Metro Nashville Jail on January 21st, charged with domestic assault with bodily injury. A judicial commissioner set her bond at $1,000.