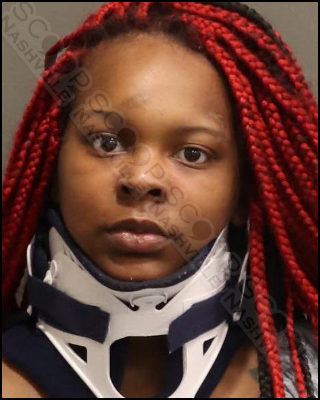 21-year-old Krisshayah Greer was jailed this week on an outstanding warrant from December of 2020 charging her with domestic assault and theft. She, along with two other co-defendants, reportedly came to her grandmother’s home, who had recently died. The trio attempted to remove items from the home, however, they encountered her mother, who is the executor of the estate. When she told them they had to leave, all three pushed her down and began to kick and punch her once she was on the ground. Krisshayah is additionally charged with stealing her mother’s iPhone while she was on the ground. All defendants fled the scene before police arrived, and warrants were issued.

Krisshayah Kamontease Greer, of Nashville, was booked into the Metro Nashville Jail on April 29th, charged with domestic assault with bodily injury and theft. She is free on a $2,000 bond.