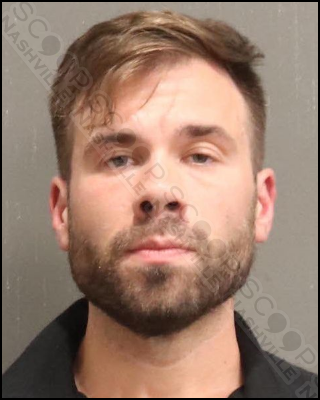 36-year-old Russ L. Garner was jailed Saturday on a warrant charging him with the domestic assault of his wife, Kelly Macfarlane, who recently filed for divorce, citing inappropriate marital conduct and irreconcilable differences. She says she asked to see his cell phone due to “suspicious behavior” at which point she gained access, however, a struggle ensued. The victim provided body-worn camera footage of what she says were injuries from the assault and states she was threatened to not mention the assault to the police.

A filing in the divorce case from Russ Garner sheds additional light on the incident, stating that she took his phone and hid it behind her back, and began kicking him. He admits to grabbing her wrist in an attempt to stop her from kicking him and to retrieve his stolen phone. All this happened while their child watched from a playpen. Police did not immediately make an arrest in the case, it was several weeks after the wife visited the Family Safety Center, and she had to take out the warrant herself, it was not signed by the police as the prosecutor.

Russell. L. Garner, of Lady Nashville Drive in Hermitage, was booked into the Metro Nashville Jail on July 2nd, charged with domestic assault with bodily injury. He is free on a $2,500 bond.