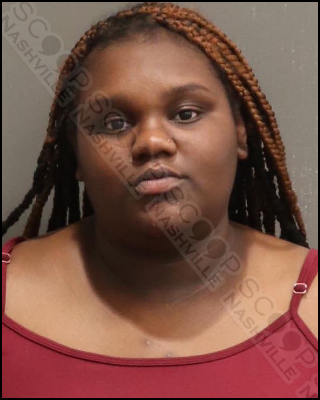 18-year-old Asyia Lewis & 21-year-old Kameisha Patterson were jailed this week after Goodlettsville Police responded to a ‘disorderly subject’ call on Green Circle on July 7th to find a large group of people inside a home yelling at Kameisha Patterson to leave the property. While officers were at the home, they observed Patterson’s girlfriend, Asyia Lewis, slap her in the face — she says she just found out that Patterson had cheated on her. They also observed Patterson slamming an iPhone onto the ground and throwing a trophy across the room. Patterson was restrained and taken out of the apartment, but pulled away and attempted to flee as she was being cuffed. Patterson is also accused of striking Asyia’s mother, Lumeka, in the face. During the investigation, Patterson claimed she needed to use the restroom and when a female officer was escorting her to the restroom she sprinted away from custody for a short period of time before being captured again.

Asyia Lewis, of Greens Circle in Goodlettsville, was booked into the Metro Nashville Jail on July 7th, charged with domestic assault. She is free on a $1,000 bond.

Kameisha Patterson was booked into the Metro Nashville Jail on July 7th, charged with domestic assault, vandalism, resisting arrest, evading arrest, and failure to be booked on a state citation. A judicial commissioner set her bond at $4,100.