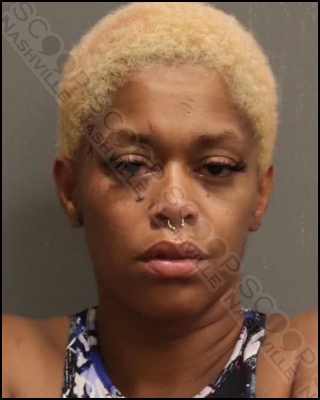 Metro Nashville Police arrived at the home of Isha Ford to find her 34-year-old Darisha Heard outside and very intoxicated. The two had been in an argument, according to the mother, after Darisha’s young son told Isha that Darisha had been driving while drunk. The child was sent upstairs, and the mother and daughter reportedly began to brawl. Darisha is accused of smashing out a living room window and attempting to smash through a second window until she was stopped by her mother. Darisha punched her mother in the face during this tussle, and her mother then had to physically sit on her daughter until officers arrived, at which time she went outside the home. The mother suffered a bruised and blackened eye and glass shards embedded in her body.

Darisha Heard was booked into the Metro Nashville Jail on August 22nd, charged with domestic assault with bodily injury and vandalism. She is free on a $2,000 bond.