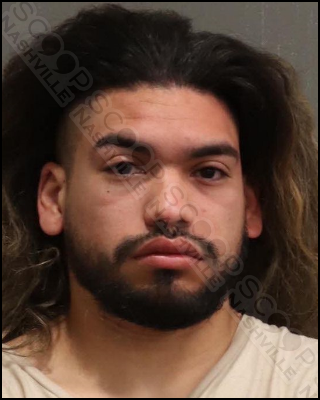 Metro Nashville Police working the Entertainment District Initiative in downtown Nashville Saturday encountered 26-year-old Jeshua Torrens as he was attempting to fight random people who were walking outside of Kid Rock’s Bar. He reportedly reeked of alcohol and appeared extremely intoxicated. As he was being arrested for public intoxication, Torrens balled up his fist and attempted to punch Officer Cottrill and then tensed up his body and used his legs to resist being placed in the back of a patrol car.

Jeshua Torrens of Williamsburg St in Westmont, IL, was booked into the Metro Nashville Jail on September 10th, charged with public intoxication, assault of an officer, and resisting arrest. A judicial commissioner set his bond at $2,100.