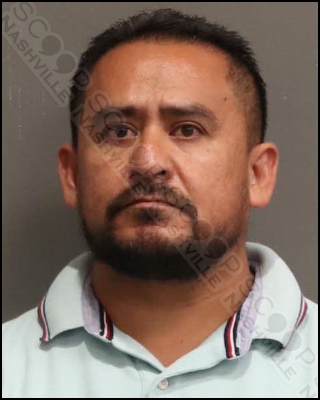 43-year-old Ricardo Chavez Martinez was jailed this week on an outstanding warrant from July charging him with the felony aggravated assault & strangulation of his 15-year-old son. Ricardo assumed his son was on drugs, which the child denied. Later, when the child was asleep, Ricardo entered his bedroom and pressed the child’s face into a pillow while gripping his neck, causing the child to lose consciousness and leaving him with injuries from his fingernails digging into his neck. The child’s mother and two younger brothers witnessed the entire assault.

Ricardo Chavez Martinez was booked into the Metro Nashville Jail on September 22nd, charged with aggravated assault with strangulation. A judicial commissioner set his bond at $10,000.