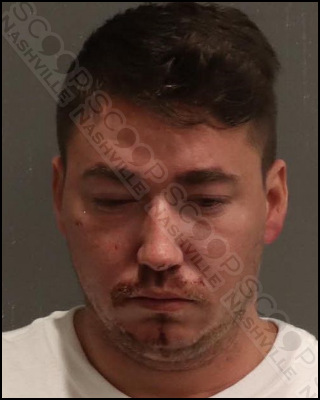 30-year-old Robert Dillon is charged with disorderly conduct and public intoxication after he attempted to “bust the door open” to his downtown Nashville apartment building and was pepper-sprayed by security. He was reportedly attempting to get into an inner door leading to the residences when a guard says she told him to stop trying to break through the door, and he became irate. She says he yelled at her, took a fighting stance, and took a swing at her. Fearing for her safety, she pepper sprayed the resident. She says he then fell to the ground and began hitting his own head on a ramp causing his nose to bleed. Officers arrived and say he smelled of alcohol and took him into custody. Dillon has frequently opined about the digital key system not working at the building and often posted photographs of the rooms full of trash in the complex.

Robert Dillon of Nashville, TN, was booked into the Metro Nashville Jail on September 27th, charged with disorderly conduct and public intoxication. A judicial commissioner set his bond at $1,000.