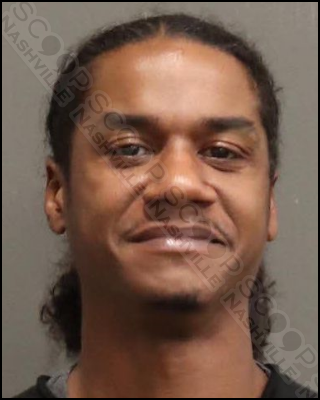 Police say 36-year-old Newton ‘NJ’ Ford attempted to get into the SkyHouse apartments tower when the concierge stopped him as he was not a resident had didn’t have any authorization to be there. This resulted in Ford hurling obscenities at the concierge, such as “bitch,” and stating he would spit in her face if it weren’t illegal. While police were there, Ford had reentered the lobby with a resident and continued where he left off with the verbal assault on the concierge. A bystander in the lobby, David Malinosky, had identified Ford, to which he replied “I’ll fight you, midget!” — Officers noted Ford was only three inches taller than the bystander. He then pumped out his chest in a laughable attempt to intimidate the bystander. He was also in possession of 4 grams of marijuana at the time of his arrest.

Newton Ford of Jayne Lewis CV in Bartlett, TN, was booked into the Metro Nashville Jail on October 23rd, charged with assault, disorderly conduct, criminal trespass, public intoxication, and possession or casual exchange. A judicial commissioner set his bond at $2,600.