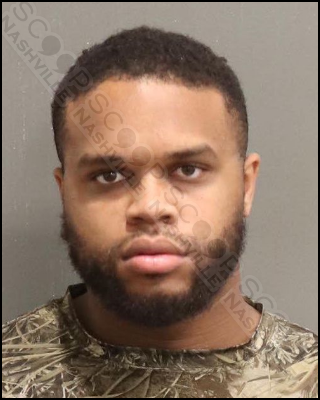 Despite an initial $10,500 bond, 23-year-old Derrick Vassar is free on pre-trial release after fleeing from police working the street racing initiative Friday night. AirOne was surveilling the area near Firestone Parkway and Old Hickory Blvd when Vassar, driving a matte black Chevrolet Corvette, was seen doing donuts in the parking lot of a Thornton’s convenience store , where there was a “sea of vehicles,” according to police, who say Vassar had already fled a traffic stop. As he exited the parking lot, he traversed to I-24 with multiple police vehicles in pursuit with full lights and sirens. AirOne noted that Vasser bailed out of the vehicle on Crossing Place and fled on foot until he was apprehended nearby. Police say he tensed up and pulled away while being arrested, and the tag on the Corvette belonged to a Ford vehicle.

Derrick D. Vasser of W. Schell Street in Gallatin, TN, was booked into the Metro Nashville Jail on October 29th, charged with evading arrest, evading arrest in a motor vehicle, aggravated reckless driving, and resisting arrest. A judicial commissioner set his bond at $10,000, and the Davidson County Sheriff’s Office gave him pre-trial release from their facility.

This arrest was part of a coordinated street racer enforcement effort by MNPD Traffic officers, Violent Crimes Division, South Precinct Officers, and THP Troopers, along with multiple aircraft. A number of citations were also written during the operation for violations, including speeding, excessive noise, careless driving, running red lights, failure to use a turn signal, and not having proof of insurance.