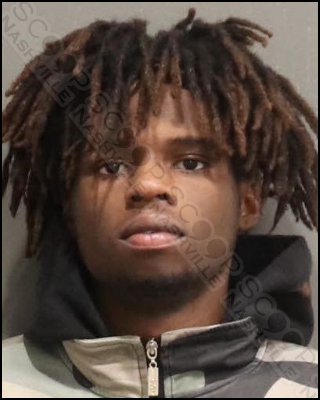 Witnesses say 19-year-old Keonza Scales pointed a handgun at his mother’s face and stated, “bitch, get back,” during a family argument. The incident began when Keonza’s 16-year-old brother was in an argument with their mother, Ivary Scales, and Keonza riled up his brother, antagonizing the situation, and causing the juvenile’s behavior to worse. The juvenile then pulled a gun, which belonged to his mother, and was quickly disarmed by his mother and a witness, and Keonza was told to secure the handgun. Instead, he pointed the handgun at his mother’s face while making threats. He was not present when police arrived, but a warrant was issued for his arrest. He was booked on that warrant this week.

Keonza M. Scales was booked into the Metro Nashville Jail on November 16th, charged with aggravated assault with a deadly weapon. A judicial commissioner set his bond at $8,000.