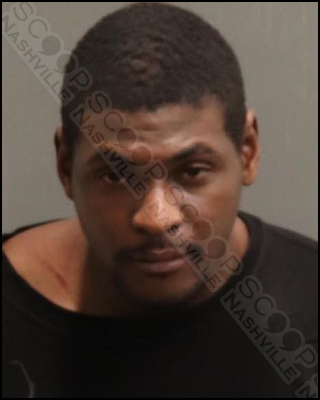 21-year-old Kaylum K. Futrell has been in a throuple relationship with both Carisa Murrell and Keyonia Stewart, and on Thursday they were all three at Stewart’s apartment, along with other friends. Someone at the gathering informed the two women that Kaylum just wasn’t satisfied with dating two women at the same time and had been cheating on them with a third, which he confirmed. The two women announced they were ending their relationship with him, and the throuple erupted into an altercation. Kaylum pushed Stewart out of her own apartment; he later stated it was so he wouldn’t hurt her.

A neighbor, Crystal Evans, heard the commotion and announced she was calling police. Kaylum then reportedly opened the door and assaulted Evans and her juvenile children, who were all outside. He then grabbed the branch of a tree and attempted to damage her vehicle, and then turned the branch on Evans, assaulting her with it, striking her in the head. During his arrest, Futrell spat on an officer.

Kaylum K. Futrell was booked into the Metro Nashville Jail on December 7th, charged with assault of an officer, domestic assault with bodily injury, and aggravated assault with a deadly weapon. A judicial commissioner set his bond at $12,500. There is a hold on his release from Sumner County.