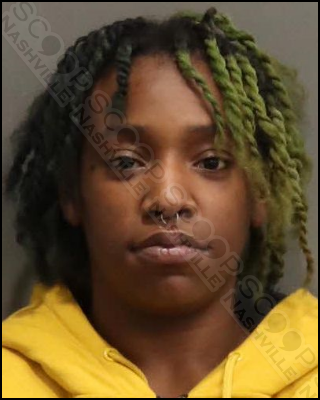 19-year-old Kiara Kalandra Neely was arrested Sunday and charged with domestic assault. Police say the incident began Saturday evening when Kiara’s sister, Ciara Neely, refused to leave Kiara’s apartment. Kiara called police and stated her sister Ciara had a stick and was refusing to leave. Kiara admitted to hitting her sister first to get her to leave. During the ensuing fight, Kiara punched Ciara in the stomach and slapped her in the face. Ciara also says her sister bit her hand. Police observed no physical injuries to Kiara, but Ciara had scratches on her face and hand. When asked to clarify the use of the stick, Kiara told police Ciara didn’t hit anyone with the stick. At this point, police determined Kiara Neely to be the primary aggressor and placed her under arrest for domestic assault, and transported her to booking.

Kiara Kalandra Neely of 42nd Ave n in Nashville, TN, was booked into the Metro Nashville Jail on December 11th, charged with domestic assault with bodily injury. A judicial commissioner set her bond at $1,000.