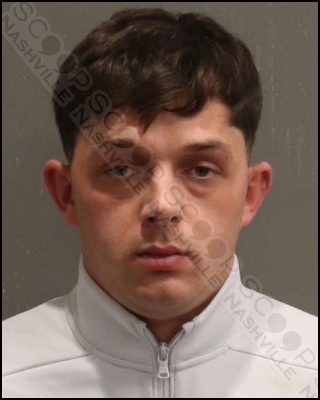 27-year-old British tourist Elliot Williams faces charges from two separate incidents this week in downtown Nashville. On Tuesday, he and a friend, Patrick Doran, were harassing multiple vendors on Broadway. Williams punched Conor Patrick Wall in the face, causing him to fall and hit his head. The victim was transported to Vanderbilt, where the attending physician said he may have sustained a brain injury. Williams fled the scene back to his room at the DoubleTree Hotel, where police were called a short time later after he reportedly assaulted his wife, Jenny Moore. She states the two were in an argument, and when she tried to leave the hotel room, he blocked the doorway and struck her in the face. She had a busted lip and was bleeding from the assault, along with a small pool of blood on the bed. During this interaction, police recognized Williams from the earlier incident on Broadway, and he was taken into custody for both incidents.

Elliot Williams of Shepherds Pool in Evesham, UK, was booked into the Metro Nashville Jail on December 20th, charged with false imprisonment, domestic assault with bodily injury, and aggravated assault. A judicial commissioner set her bond at $28,000.