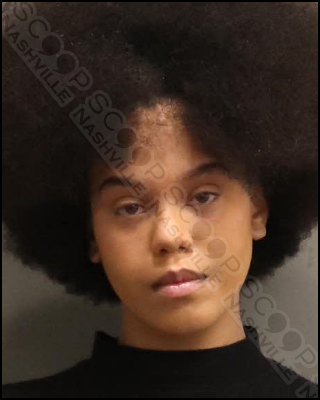 21-year-old Alliyah Wright told police she only had “a mixed drink” at a Bell Road bar several hours prior to being stopped for weaving while driving just after 1 a.m. on January 1st on Smith Springs Road. Officers say they initiated a traffic stop after she crossed into the center lane multiple times and went from fast to slow speeds. She was reportedly confused and reeked of alcohol. After performing poorly on field sobriety tests, Wright was transported to booking and charged with DUI.

Alliyah J. Wright was booked into the Metro Nashville Jail on January 1st, charged with driving under the influence (DUI) and violation of the implied consent laws. A judicial commissioner set her bond at $2,000.