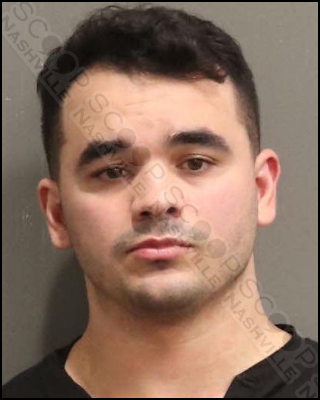 25-year-old Paulo Palrao was kicked out of Lucky’s Bar on Broadway in downtown Nashville early Saturday morning after staff said he became disorderly inside the bar and to other patrons. Once outside the bar, he continued to fight with bouncers due to his belief he was mistreated while being escorted out of the bar. An officer wrote, “it was evident due to the suspect’s undiminished agitation that his behavior was likely to continue.”

Paulo J. Palrao of 12th Ave South in Nashville, TN, was booked into the Metro Nashville Jail on December 31st, charged with disorderly conduct. A judicial commissioner set his bond at $50, and the Davidson County Sheriff’s Office gave him pre-trial release from their facility.