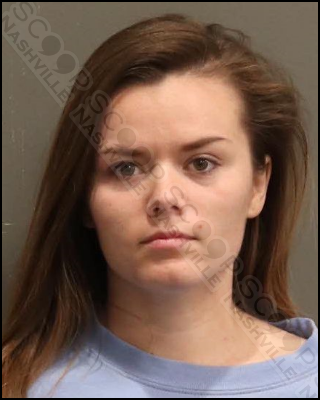 Abigail Wate Ayala says she was at Sonny’s Bar on December 12th with her ex-boyfriend when 27-year-old Victoria ‘Toria’ Marie Anderson suddenly appeared at the bar and tossed a drink onto her before exiting the building. As Abigail and her ex were leaving the bar an hour later, Toria Anderson was still outside waiting for them. Toria shoved Abigail from behind, causing her to sustain serious injuries, including a torn UCL and fractures to her elbow, requiring surgery. Toria also took Abigail’s cell phone from her and deleted the video that she had recorded of the altercation, then smashed the phone onto the ground. Officers obtained security footage of the attacks and took out warrants for Anderson, including one for felony aggravated assault, and she was taken into custody this week.

Victoria Marie Anderson of Torbett St in Nashville, TN, was booked into the Metro Nashville Jail on January 5th, charged with vandalism, tampering with evidence, aggravated assault, and assault. A judicial commissioner set her bond at $28,500.