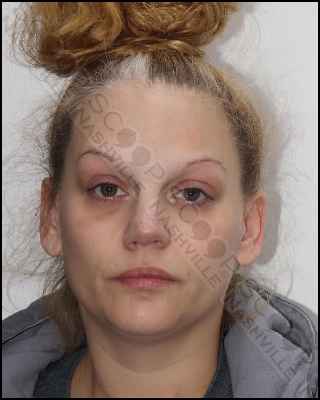 36-year-old Erica Leigh Alcorn was jailed for the past two years, and when she was recently released, she picked up exactly where she left off. Alcorn says a woman Krist Pegg, owed her $800 when she was incarcerated. While she was in jail, Pegg passed away, and now Alcorn wants Pegg’s daughter, Hailey Stevenson, to pay up. Haily says she was always shielded from her mother’s activities, which sometimes included the selling of drugs, and knew nothing of Alcorn’s claim. Despite multiple requests to stop, Alcorn had continued to make threats to Hailey, such as commenting on her social media, “Girl, just pay me your momma’s debt, or your kids will pay for it, okay?” Another message said, “bullets don’t have eyes, so let’s just hope you nor the boys are near windows,” and finally, on her own page, she posted, “Y’all can laugh now, but when y’all are crying because you have to bury two little boys who’s laughing then?”

Erica Leigh Alcorn of Rachels Court in Hermitage, TN, was booked into the Metro Nashville Jail on January 4th, charged with harassment. A judicial commissioner set her bond at $1,000.