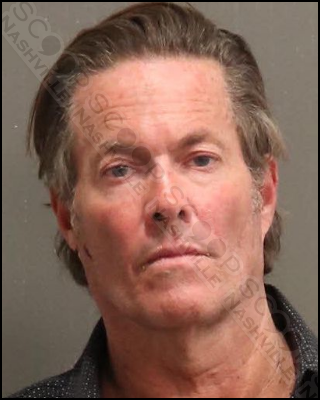 Police say 61-year-old John Erik Wiggins was driving on Broadway in downtown Nashville in the early hours of Saturday morning when they observed him swerving between lanes. A traffic stop was initiated, and Wiggins was reportedly visibly intoxicated and reeked of alcohol. He admitted to consuming “two drinks” prior to driving. He performed poorly on field sobriety tests and was transported to booking, charged with DUI.

John Erik Wiggins of Red Feather Lane in Brentwood, TN, was booked into the Metro Nashville Jail on January 7, charged with driving under the influence (DUI) and violating the open container law. A judicial commissioner set his bond at $3,000, and the Davidson County Sheriff’s Office gave him pre-trial release from their facility.