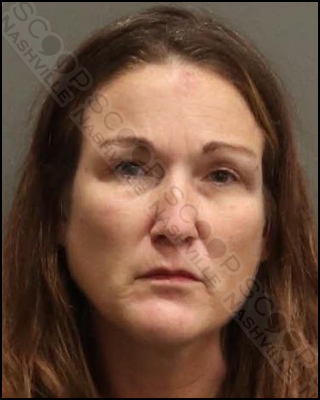 43-year-old Jill Harp was found in the lobby of the Graduate Nashville Hotel near Vanderbilt in the early morning hours of January 6. Police say she was not a guest of the hotel, and security had asked her to leave the property multiple times. Harp reportedly told security she needed a place to sleep and was going to stay at the hotel “with or without a room!” As officers arrived to take her into custody for criminal trespass, she slipped her handcuffs once inside the patrol car, and she maneuvered in a way that allowed her to attempt to kick out the back window during transport to booking.

Jill L. Harp of N. Center St. in Tuscola, IL, was booked into the Metro Nashville Jail on Jan 6, charged with resisting arrest, criminal trespass, and disorderly conduct. A judicial commissioner set her bond at $200, and the Davidson County Sheriff’s Office gave her pre-trial release from their facility.