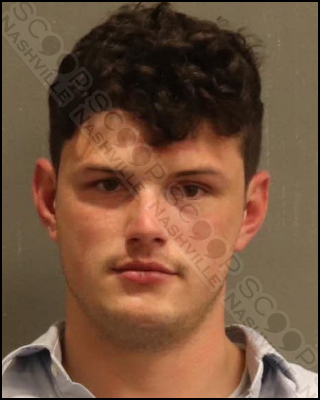 Metro Nashville police working the Entertainment District Initiative in downtown Nashville late Saturday night say 24-year-old Jack Elliot Beckham refused to leave The Valentine on Broadway. They arrived to find Beckham unsteady on his feet and extremely intoxicated. He had been denied entry due to his level of intoxication and refused to leave the front area of the business, blocking other patrons from entering. As he was being taken into custody for disorderly conduct, Beckham began fleeing from police. Officers caught up with the Brentwood native and took him to the ground. Beckham then bit Officer Tyler Jordan’s left hand, causing a laceration injury.

Jack Elliot Beckham of Bellevue Rd in Nashville, TN, was booked into the Metro Nashville Jail on September 25th, charged with assault of an officer, public intoxication, disorderly conduct, and resisting arrest. A judicial commissioner set his bond at $5,200.