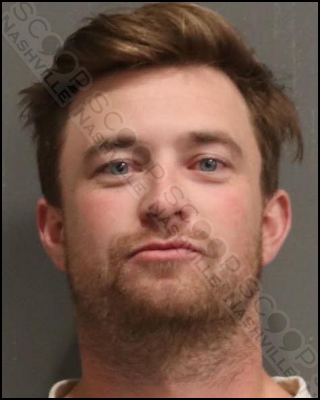 25-year-old David White was involved in a crash on Old Charlotte Pike late Saturday night and called his brother for assistance. His brother then contacted Metro Nashville Police, who responded to the scene and located White, who appeared to be intoxicated with bloodshot eyes and slurred speech. Officers say White laughed and joked throughout the entire interaction and admitted to consuming “two alcoholic beverages” hours before the crash. He performed poorly on field sobriety tests and was transported to booking and charged with DUI.

David Thomas White of Beacon Lane in Nashville, TN, was booked into the Metro Nashville Jail on October 2nd, charged with driving under the influence and implied consent violation. A judicial commissioner set his bond at $2,500.