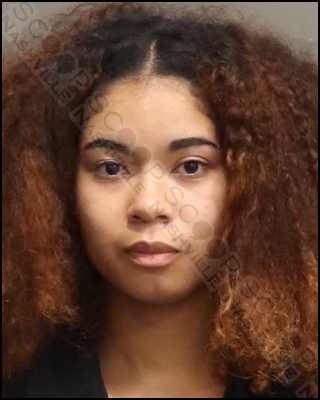 23-year-old Mya Delgado called 911 to report her girlfriend, Chelsea Channel Bryanton (AKA Cinko), wouldn’t allow her to retrieve her belongings from their shared apartment. The couple returned home after being out at a nightclub and got into an argument as Mya had a flat tire on the way home with no way to call for help due to Chelsea taking her phone. Mya says Chelsea came at her, so she threw her keys at her in “self-defense” from approximately 8-10 feet away. Chelsea told police that Mya came home and began destroying the bedroom looking for her phone, and then pushed Chelsea down in anger. Once she found them, Mya reportedly hit her girlfriend in the head while holding the keys. Due to the victim’s documented injuries and the damage around the home, Mya was determined to be the primary aggressor and taken into custody.

Mya J. Delgado of Hickory Hollow Place in Antioch, TN, was booked into the Metro Nashville Jail on January 1, charged with domestic assault with bodily injury. She is free on a $1,000 bond.