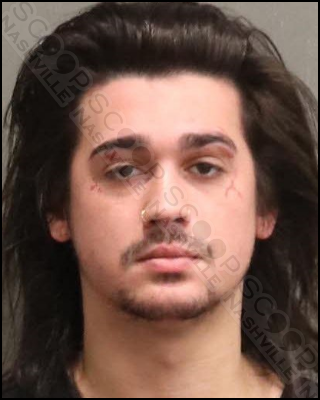 23-year-old Austin Hawk Harrison was jailed this week on an outstanding felony warrant charging him with aggravated assault/strangulation. Elizabeth Egan says her boyfriend, Austin, had locked her out of their shared residence, and an argument continued as he let her back inside. He reportedly punched her and knocked her onto the ground before getting on top of her and strangling her until she lost consciousness. When she came to, Egan says she was being dragged by her hair into another room. When he realized she was conscious again, he continued the assault and strangled her a second time. During a struggle, she was able to kick him in the face twice, after which he stood up, walked upstairs, and fell asleep or passed out across the bed. Officers observed multiple injuries to the victim. [WARNING: images and video in the story are graphic]

Austin Hawk Harrison of Shaylin Loop in Antioch, TN, was booked into the Metro Nashville Jail on January 7, charged with aggravated assault/strangulation. He is free on a $10,000 bond.