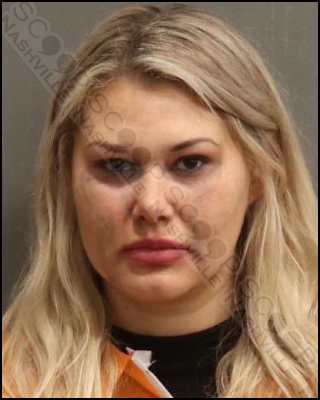 35-year-old Lindsay Lyons was kicked out of the FGL House bar in downtown Nashville in the early hours of Sunday morning due to her behavior but refused to leave the property. Metro Nashville Police Officers arrived at the location, and she continued to refuse to leave. Officers asked one last time for her to arrange a rideshare or way home, and Lyons reportedly told police, “take me to jail!” while screaming profanities at them. Due to her obvious state of intoxication and refusal to cooperate for her own safety, she was transported to booking and charged with public intoxication.

Lindsay Lyons was booked into the Metro Nashville Jail on January 8, charged with public intoxication.