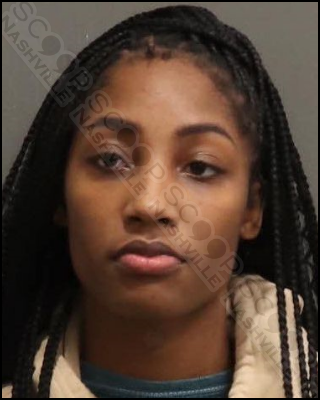 26-year-old Jamilrah Sanford is free on a $3,000 bond after she was jailed for attacking the father of her child, Nicholas Turner, and his new girlfriend, Keri bell, and then throwing a Sluhie on them when she was done with the assault. The incident, which happened in late November at the Urban Air park, began when she approached Nicholas while he was visiting with their son at the location. Jamilrah was reportedly upset that his new girlfriend was present and attempted to punch her in the face. Nicholas reportedly stepped in between his past and future and took the punch. Jamilrah then reportedly followed them as they walked to the front door and grabbed his girlfriend by her hair, and dragged her. Immediately after the assault, Jamilrah approached the couple again and threw a full Slushie on both victims.

Jamilrah N. Sanford of County Hospital Rd in Nashville, TN, was booked into the Metro Nashville Jail on January 7th, charged with domestic assault with offensive/provocative conduct and assault. A judicial commissioner set her bond at $3,000.