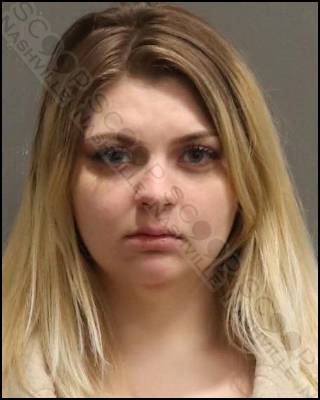 25-year-old Ashley Asauskas crashed her vehicle just 200 yards from her home in the early hours of Monday morning. Shen then exited the wrecked car and walked to her home just down the street. A witness called 911, as did Ashley when she got home. She initially wanted to be checked out by EMS but later signed a refusal. She stated she had consumed alcohol prior to driving and performed poorly on field sobriety tests. She later blew a 0.163% BAC on a breathalyzer and was charged with DUI.

Ashley F. Asauskas of Harris St in Madison, TN, was booked into the Metro Nashville Jail on January 9th, charged with driving under the influence. A judicial commissioner set her bond at $1,500, and the Davidson County Sheriff’s Office gave her pre-trial release from their facility.