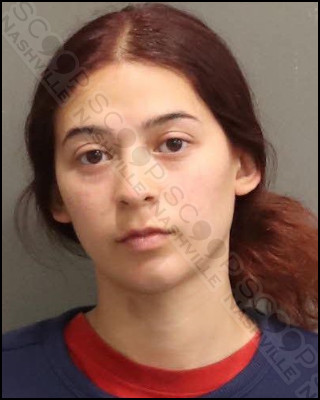 19-year-old Andrea Soudy is charged with the domestic assault of her sister, Alejandra Soudy. Soudy was jailed Monday on the outstanding warrant from October. Her sister arrived at St. Thomas West Hospital for treatment of her injuries from the assault, including a cut on her nose. She told police she was at her residence when she was approached by her sister Andrea as well as her other juvenile sister. She reports the argument was about having to drive to pick up their mother, who they had left at a restaurant. She says both of her sisters punched her and pulled her hair during the argument.

Andrea Soudy of Asheford Ct in Antioch, TN, was booked into the Metro Nashville Jail on January 9th, charged with domestic assault with bodily injury. A judicial commissioner set her bond at $2,000.