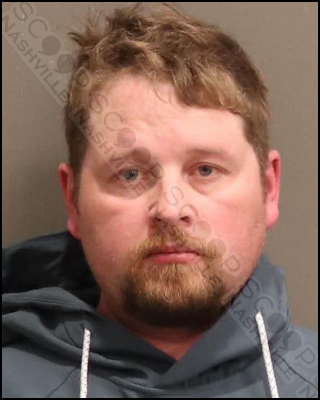 Metro Nashville Police responded to the Hyatt Centric Downtown Nashville Hotel at 2 p.m. Monday, where 37-year-old tourist Todd Miller was due to check out as his stay had ended. Instead, he was reportedly extremely intoxicated and had just defecated in an elevator and was wandering the floors of the hotel while refusing to leave, including “scooting his poop-covered butt cheeks across the floor like a dog,” according to a witness account of the incident. As officers arrived, the staff pointed to a black Dodge Ram, which he had just gotten into and started the ignition, and that’s where police found the feces-covered man. Miller stated he had just finished a box of wine and asked for a lawyer. He was charged with DUI and transported to booking.

Todd Miller of Godfrey Rd in Bancroft, MI, was booked into the Metro Nashville Jail on January 9th, charged with driving under the influence and implied consent violation. A judicial commissioner set his bond at $2,000, and the Davidson County Sheriff’s Department gave him pre-trial release from their facility.