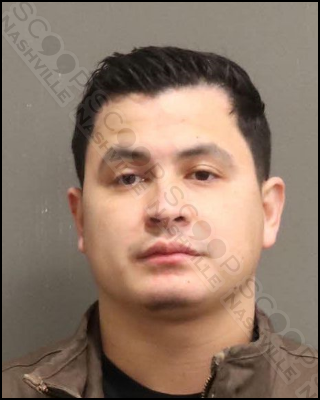 27-year-old Armando Bucio was at the intersection of Broadway and 4th at 1:15 a.m. Saturday when officers observed him open his driver’s side door and vomit onto the ground. Officers approached to check on his welfare and immediately observed him to be extremely intoxicated. He performed poorly on field sobriety tests and stated he had one Whisky & Coke and one shot of tequila prior to driving. He would later blow a 0.120% BAC on a breathalyzer.

Armando Bucio of Cedarhill Dr in Antioch, TN, was booked into the Metro Nashville Jail on January 14th, charged with driving under the influence. A judicial commissioner set his bond at $2,500.