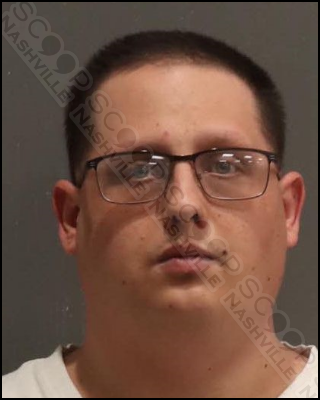 29-year-old Zachary Johnson was in his vehicle at the Cook Day Use Area of Percy Priest Lake in the early hours of Saturday morning when an officer conducted a traffic stop on him due to the area being closed. While he was explaining that he was “playing on his phone,” the officer noticed a strong smell of marijuana coming from the vehicle. Johnson admitted to having a little bit of marijuana in the vehicle and that he had just smoked, too. He also advised of a firearm in the vehicle. A search revealed 14 grams of marijuana in the center console and an M&P Shield 9mm under the front passenger seat.

Zachary Johnson of Harbor Hill Pl in Nashville, TN, was booked into the Metro Nashville Jail on January 14th, charged with possession of a weapon while under the influence. A judicial commissioner set his bond at $1,000.